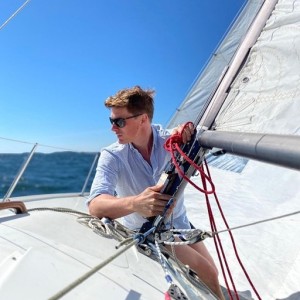 Niklas Holmström
I'm Niklas from Finland! I work as Business Development Director here at Circlewise and have been doing so since 2020. Over a year ago a new plan was hatched at Circlewise. A plan that would enable us to help our existing advertisers and publishers while at the same time increasing our own geographical reach and expand our area of expertise. The plan was a big one for a small company and the plan was one that would come to have an enormous impact on us all.

During the terrifying months of early spring in 2020 when COVID was something new and some verticals (especially the travel vertical for obvious reasons) were seeing a huge decline, we at Circlewise decided that neither a pandemic nor a P2P lending crisis is something that will stop us reaching our goal – Namely to always put the customer first and always keep on moving. So back then we decided to expand in an extraordinary way:

By consolidating the market through the acquisition of companies that fit our culture and our goals.

Having worked with the same technology for over four years, the team at Performission Finland were very familiar with many of the people at Circlewise, and as Performission Finland’s CEO Niklas had previously worked personally with some of the folks at Circlewise, the connection between the two companies had always been strong. Both companies follow a client centric approach with a strong focus on problem-solving through quick thinking and keeping things simple. The plan to merge was first discussed in early 2020 and it was quite evident very quickly that this move would significantly benefit both companies and their partners. The Finnish advertisers would be able to enjoy a massive expansion in geographical reach while at the same time being able to continue working as normal with their preferred partners. The publishers, on the other hand, were given the chance to launch many new offers in many new GEO’s on the familiar platform they had grown used to over the years. For Circlewise the acquisition of the very specific know-how that Performission Finland had, especially in a few select client categories (cosmetics, adult shops, and finance), was something they would be able to leverage across their existing markets.

By August 2020 the merger was formalised and without any excess work or disruption of traffic or service for any of Circlewise’s or Performission’s partners, the smooth transition was completed, and worm on the next phase of our expansion was started.​ During the merger of Performission FI and Circlewise, a plan for a second, even bigger merger, had already taken form. The focus on strengthening geographical reach and expanding the services for our partners remained, and in Adhydra from Poland a perfect match was found. Adhydra was also a familiar company from many historical connections, but also from the fact that they used the same proven technology supplied by Target Circle. Adding to this, Circlewise was a perfect fit for Adhydra as they would be able, through a merger, to serve their own clients on a broader geographical basis and with a larger dedicated team. Initial talks moved very quickly as both companies were on track and headed in the same direction. As Adhydra also shared our style of thinking where quick problem solving and simplicity instead of lofty promises and hyperbole reigned supreme, the culture fit was close to perfect. The Adhydra team brought in huge experience in areas new to Circlewise and the successful launch of our new media buying service is in huge parts thanks to the former Adhydra team whom we now are very happy to call our colleagues.

The merger with Adhydra was successfully completed in September 2020.

At the time of writing, in the end of February 2021, we have successfully concluded these two mergers. Now we can let the numbers speak for themselves for a moment: The rapid expansion of our company and the success of our co-managed partnership marketing strategy have, through these mergers, paved the way for our future and when I take a look at how fast we came this far, I can only say that 2021 is looking very bright for Circlewise. I would also recommend all readers to keep their eyes peeled for future developments. Our journey has just begun… Check out our blog post on the basics of affiliate marketing